Last month I said that the project bike would be at the Cologne show, well it was, but it wasn't. Confused? So am I.

Because Bob Blackman needed the engine and frame to build the body around, construction of most of the metal bits, Swingarms, steering and the countless other details were scheduled to be built during the fortnight preceding the show. But fate stepped in at this time and delivered unto me a dose of a severe throat infection which put me out of action totally. As I normally work on my own with prototypes that looked like the end of the show debut. The bike was due to be on the Motad exhaust stand and when I rang the gaffer, Alan Baker, to break the news, it was obvious that this would leave them in a bit of a spot. So a bit of head scratching resulted in the idea of fitting the SuperBike body to an existing bike, the only one in existance with similar front suspension and chassis being the Kawa. 750 of Steve Woodhouse.

There would still be a lot of work to get this bike converted but it was the only way that I could see of actually having a machine for Cologne. Steve not only agreed to lend his projectile but gave up two weekends to help prepare it. Valuble help came from other quarters also, Motad sent down Garry Taylor for a few days who enjoyed himself immensely hacksawing bits off Steve's bike and fabricating various items. Paul Griggs, a New Zealander who will be the first production Q2. customer rolled up his sleeves and got stuck into laying up fibreglass to make the belly pan.

Various suppliers came up trumps with rapid service. Acrybre Products set up the screen at short notice, but the medal for speed must go to Oliver Plunkett and his team at P & P Seating in Birmingham. Because I was laid up, the moulds for the seat foam and the seat base were left lying around my workshop instead of being sent to Birmingham. When I eventually stumbled into work, time was getting short, but a phone call to P & P indicated that they would try to do it. In the event, 24 hours after I put the moulds on a train, P & P had the finished seat and knee pads back on a train to me, and what a good job they had done too. 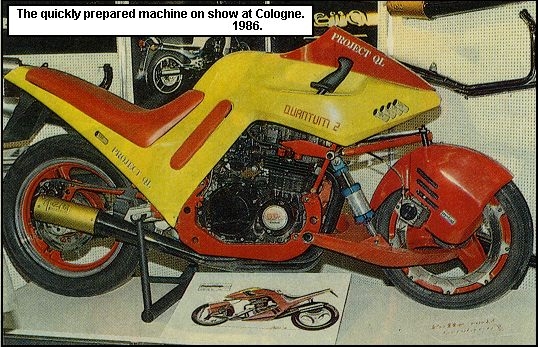 Things were going too well though, the last job prior to assembly was painting the body, there was no time to send it out to a proper paint shop, and so I had to do it. My spraying facilities are primative as I rarely do any thing other than a bit of touching up or spraying patterns. The colour was to be either blue or yellow, I had more yellow so the decision was taken on that basis. The paint was cellulose and the day was wet, anybody who knows about painting knows what happened next ----- It BLOOMED. That is, on drying the surface goes to a matt finish with white-ish areas all over it, it looked horrible but there was no time to do anything about it.

Alan Baker was coming at 7am. the next morning on route to the show, I just hoped that he might have time in Germany to flat it down a bit and improve things with an aerosol. Alan didn't say much when he collected it, but I am not sure whether that was because of the early hour or whether he couldn't believe the state of the paint----- it was bad! At the time of writing this the bike is still at the show so I don't know if it looks any better but I have heard that it has attracted much attention. Anyway I must now get back to building the real project bike.